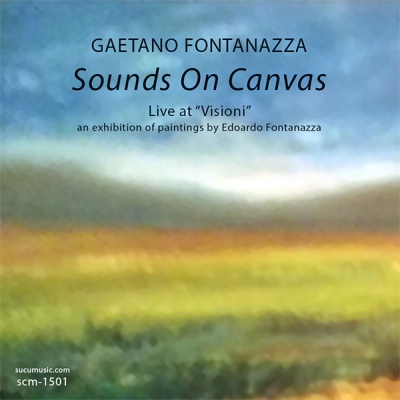 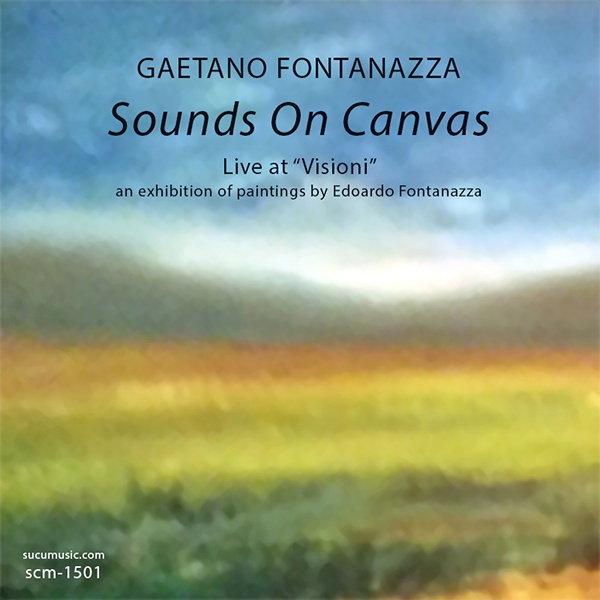 Sounds On Canvas by Gaetano Fontanazza

Gaetano Fontanazza’s latest release, ‘Sounds on Canvas’ is the live soundtrack to an exhibition of paintings by his father, the late Edoardo Fontanazza. As people admired the remarkable works of art hanging on the walls of a gallery in Enna, Gaetano supplied a live soundtrack to the event which was then recorded for this release. This is music that, although conceived as support to an event, stands on its own feet and is fantastic even after the event. Enjoy!

‘Masks’ is the opening track in the album. Guitar drones and soundscapes which remind of some moments in Brian Eno’s ‘On Land.’ Gaetano’s trademark textures create a sort of tridimensional sound which bears the listener on the air to faraway lands of the mind and soul.

The atmosphere in the second track of the lot, ‘Woods in Pink,’ is even more dilated and thin. Here we are floating in space, maybe cavorting along with asteroids and comets. A planet here, the rising sun there, Gaetano’s guitar carries us through a voyage we would love to last forever. No change of mood or abrupt swerving of any kind. If space had a sound, this is what it would sound like.

A darker mood permeates ‘A Painter.’ The concept that comes into mind on listening to this track is the concept of Sublime as the Romantics conceived of it, vastness, silence, darkness, hugeness that attracts and scares at the same time. We are on the edge of a plateau, the abyss opens below our feet, our gaze is attracted downwards and so are we, for we are convinced that if only we would take a leap now we could surely fly.

‘Nude’ begins with Frippesque soundscapes and long notes that roll and slide and soar up into the sky. The lead guitar paints notes on our aural canvas which create ever-changing shapes, in a kaleidoscope of colours that go from the orange of canyons to the blue of underground caves filled with gems. This is a mesmerizing guitar that lulls us as only the greatest feelings can. Additional touches of acoustic guitar make the palette of sounds all the richer and the more tasteful.

‘Fields of Light’ is a tell-tale title, in that it is precisely what the music of this track evokes. The gloaming, the last purple of the sun, and the first lights spangling fields as far as one’s eye can see. The ‘Evening Star’ is somewhere in the sky, not far away from these echoing notes that descend on the landscape below as a gentle mantle which will protect everything from the oncoming night.

‘Laying Corpse’ is a nocturnal track whose notes seem to have no end. The overall atmosphere is reminiscent of Michael Brook’s infinite guitar, with layer upon layer of notes and textures. A glider, or somebody freefalling before the parachute is opened. Or simply, the soul of the corpse soaring up to whatever afterlife is waiting for it.

Gaetano’s father was a great horse lover and rider. He would cross Sicily on his horses and young Gaetano would ride by his side. No wonder one of the tracks is dedicated to these noble animals. ‘Horses’ were also one of Edoardo’s favourite subjects for his paintings. this is the first track with anything sounding like rhythm in it. No proper percussion, but rhythmic glitches that gallop on the background depthless soundscapes and accompany the listener in this ride to infinity.

‘Imasking Again’ is the live version of Gaetano’s previously released track ‘Imasking.’ The mood in this track is completely different from what we have listened so far. First, the instrument used is an acoustic guitar, which is processed and treated with any sort of imaginable effects. The mood is quite experimental and not as relaxed. Some voices intrude for fractions of a second and even some attempts at laughing. Strings can be scraped as if with a saw while gentle chords are strummed in the background. And if some melodic notes make their way through all the rest, they only half reassure, because the remaining sounds warn us every surprise is lurking in the shade.

‘The Way Home’ closes the album with a sort of elegiac tone. We are again not far away from that sector in the sky where the ‘Evening Star’ appears. Repetition of patterns and notes, and a gentle mood that is not that far away from Robert Fripp and Brian Eno’s mid-seventies masterpiece, Gaetano’s guitar weaves melodies that now sound as recorder then as cuckoos singing from afield. The goal is near. the cottage is still a blur in the falling violet of the night, but the smoke billows out of the chimney pot and the yellow light from behind the windows warms heart and bones.

Our journey is over. We are home at last.