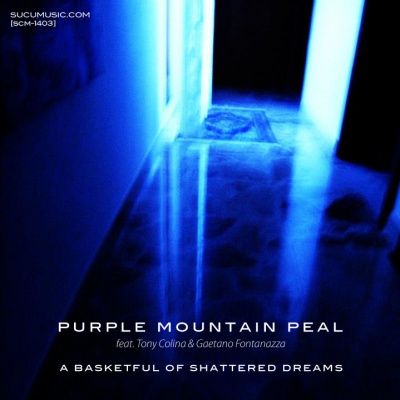 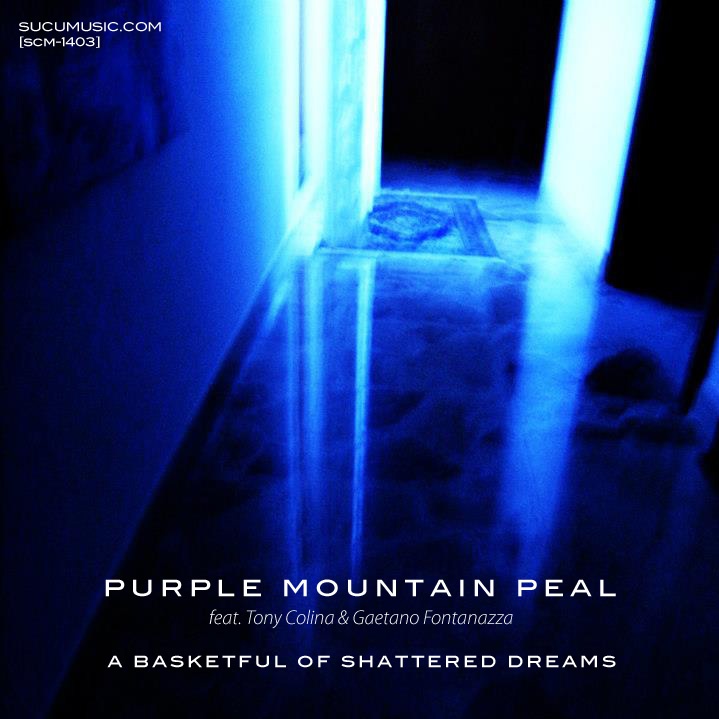 A Basketful Of Shattered Dreams by Purple Mountain Peal

The second offering by Purple Mountain Peal is an obscure unidentified object rolling adrift in an entropic void in search of the zero degree of music. There’s virtually no melody in these tracks and no rhythm, either, for no rhythmelodical coordinates are to be found in the regions the duo explore this time.
Alternately choking in desperation or floating in blissful oblivion, it is very difficult to remember that all these dark sounds are originated by such homely, apparently harmless instruments as acoustic piano, acoustic and electric guitars. A warning, if you like, that even the most ordinary objects or ideas may reveal dark sides one has never thought of.

The album begins with “The Story so Far”. Distant, ominous sounds which can herald the end of the world, or the opening of a chasm ready to swallow us all. Sounds which are rumbles, like the tail of a comet could generate, if only sound was possible in space.

Basically a track on how to get mad at the hands of ruling power, “Room 101” evokes the dystopic world of George Orwell’s novel ‘1984’. The piercing sounds remind us of the electroshock Winston Smith must suffer and the piano strings, strummed and caressed, are the sound image of a prisoner’s psyche going to fuck. the piercing sounds continue in a crescendo of rhythmless hysteria, only to be interrupted by bangs that reverberate. Not a drum, but the piano wooden frame being punched and kicked. An ordeal for the listener and a reminder that 2 plus 2 is not always 4.

Ancient books say Enochian was the language of the angels, and we all know angels weren’t the chubby babies or elfin figures of centuries of religious painting. Angels were terrible creatures one had better not to mess with. “Enochian” is nothing but a conversation between such creatures. What they’re speaking of is not for us to know, of course. We can only let ourselves be carried away by these tinkling, echoing sounds and try to feel, since understanding is out of the question here.

“A Moment of False Revelation” is when everything dissolves and reveals its true, frightening nature. Consequently, every sound in the track morphs into something else, as if taken in a vertigo of alien radio signals. It is the dropping of the mask. Everything appears for what it really is: a cacophony of dimensions where any utopia is impossible. No sense to look for a melody, a rhythm, a beginning and an end, when everything is on their way to crunch and go back to moment zero.

“Event Horizon”, or the feeling of being prisoners on a threshold for what looks like an eternity, unable to take a step forward or back and avoid the final collapse or jump into it and finally disappear. The sounds here create the hopelessness experienced on the rim of a black hole, just before one’s body begins to elongate and be sucked in by the invisible monster. The sounds are deep and disturbing, for this is the voice of a dead star.

Unlike Odysseus, the only mast we can ask to be tied to is the mast of hopelessness. no chance to avoid the mesmerising power of these cosmic mermaids. “Tie me to the Mast of Unhope” is the first track in the release with something like rhythm in it. Just a Morse code which sounds like a battalion of crickets chirruping against a background drone which is the cosmic sea our boat unsteadily sails on.

The last track in the release, “The Awakening”, is based on the short story of the same name written by Tony Colina. The Italian version of the story was published by Navarra Editore in 2012, as part of a collection of short stories on the Mayan prophecy of 2012.

The English version of the story is part of this release, as an e-book version. Here the guitar is predominant and it creates the perfect soundscapes to the feeling of a story whose subject is the end of the world. The voice reads some sentences and some out-of-tune acoustic guitar chords add to the feeling of desperation the protagonist finds himself in. only towards the end of the long track rhythm steps in, amid a cacophony of piano and guitar, which accompany the journey of the protagonist to the centre of the earth and back. Yes, back, but back to … where? Back to … when?
Note: the piano and acoustic guitar on this track supplied the sources for the sounds in all the other tracks in this release, processed and modified by Gaetano Fontanazza in a sort of alchemic way which changes them and shows new facets of sound each time around.