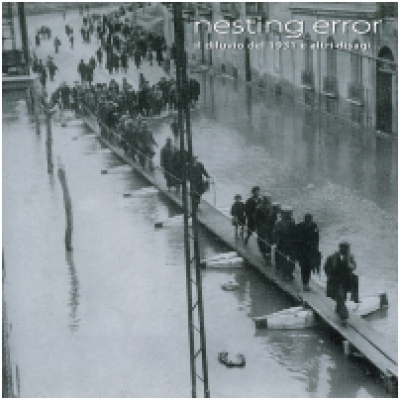 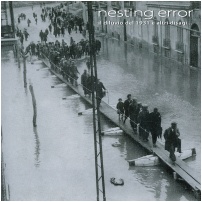 A musical breath held and started after many years without a specific motivation. Infused life and breath with full lungs for the debut album dating back to 2007 ignored, kept in the drawer and never released for any label for reasons related to recordings and overall production with then somewhat limited means belonging to the low-fi concept subsequently re-evaluated. Nesting Error are a long-lived and complex duo. Their music close to genres related to digital and analog electronic music of Central European inspiration often takes the listener's hand to lead him travels through time and history thanks also to the wise and never banal use of samples. In "Il diluvio del 1931 e altri disagi" a meteorological event of exceptional gravity that happened in their Palermo in 1931 is taken as a pretext when a flood of frightening propositions brought the entire city to its knees far from prepared or accustomed to events of the generally reaping several victims. The biblical term "deluge" expands, amplifies and extremes several more or less global spatio-temporal references which at the time of the release of the album evidently had to represent real psychological "hardships" fully narrated in each piece as world wars; the era of the planetary homeland; unfortunate American and Italian presidencies; the chilling deception of the concentration camp of Theresienstadt in a tragic game of jumps between past and present where human and cultural disintegration remains the only link. A circle that closes just where it started, the Second World War and its famous incomprehensible encrypted and encrypted messages that hid strategic information of a world completely out of control under a flood that leaves no way out in an unfortunate epochal context that is repeated without ever end.