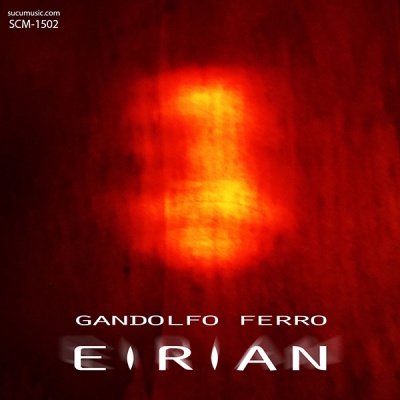 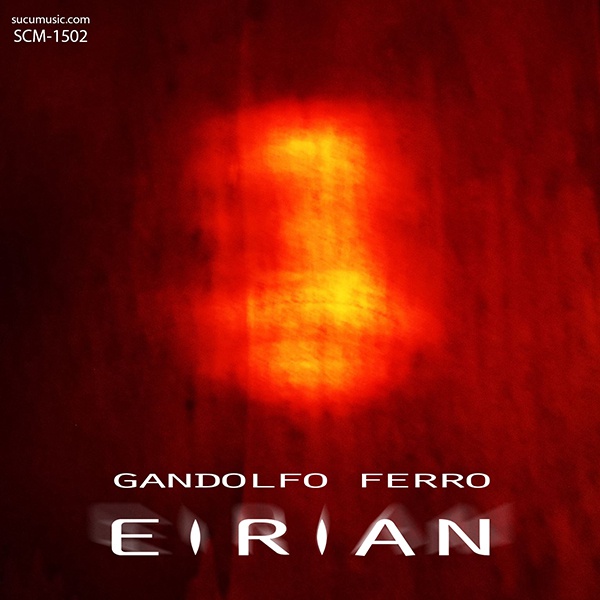 “Eirian” is a Japanese word which means “Alien” and the title of Gandolfo Ferro’s first release with Sucu Music.
In the best science fiction tradition, the theme of this concept album is alien abductions, something which, we are sure, will interest more than some of you out there. The music is what you might call dark ambient, but there are also sprinklings of ‘old-time’ electronica that widen the sound palette and make this release a very enjoyable trip to the recesses of unknown galaxies and back.

Our visitors arrive “From the Pleiades,” as the title of the opening track specifies. Electronic sounds and droning swoops and swooshes create the atmosphere of a starship taking off, then some rhythm dictates the pace, until everything seems to stop. The sound here is that of static and some ping that could well be a sort of alien pager in search of the best victim to abduct. More swooshes of deep sounds add to the ominous nature of the moment.

The victim has been identified and everything’s ready for the “Abduction.” Electronic crescendos of chords and drones introduce us to a beat following which it is easy to visualise these alien forms moving from room to room of the victim’s house until the contact is made. Each sound is now in the background, as the unconscious victim is taken away from his house and into another world.
On the alien starship, the victim wakes up and, understandably enough, he is “Afraid of those Silhouettes.” There is no melody or harmony here. Everything is dissonant and discordant so as to better underline the state of hopelessness the victim finds himself in. He looks this way and that at those alien silhouettes, he cries, or tries to, but vision and sounds are distorted as in the worst LSD nightmare (Albert Hoffmann RIP). Each attempt at establishing any connection fails and desperation is the only thing that’s left.

The starship takes off. A Babel of incomprehensible voices crowd in while “Leaving the Earth.” Drones and soundscapes step in once the starship leaves our atmosphere and plunges into interstellar space. Some rhythm kicks in, as if to give the feeling of the voyage, and a semblance of a harmonic riff counteracts, with its message of serenity, the anguish of the victim, strapped on his prison/bed.

“On their Planet” the sounds are like clusters or distant radio signals. Giant crystal buildings or bottomless granite caves, purple rivers flowing under black skies where shapeshifting satellites create living patterns. Then, a melody appears. The welcome fanfare for the starship with the alien specimen on board, for we are as alien to them as they are to us. Expectably enough, the melody is arcane, dimensionless and magic.

The toll of a bell announces the time for experiments has come. The starship’s was no pleasure cruise at all. The specimen is here and the work begins. “Their Blood mixed with mine,” for that’s the nature of the experiment. The alien world is doomed to extinction because of an unprecedented epidemics of sterility that they cannot cure, for all their technologically advanced capabilities. A human specimen is needed in order to see if the alien race can be transplanted into our species and thus survive. Alien blood is transfused into the victim’s body and circulation and the operation is underlined by a wide array of electronic sounds and patterns that in parts can even remind us of old, glorious Kosmiche Kuriere. At the end of the operation, the only thing left to the aliens is to wait and see how the specimen will react, hoping for no rejection.

“I woke up … not a Human anymore” The victim wakes up. Voices and shapes whirl around him. He’s not sure about himself anymore. The only thing he’s certain of, he’s not fully human anymore. The sounds are dark and ominous, there’s no melody in this reawakening, the victim is surrounded by the alien doctors, they all discuss about him in their guttural voices. The moment he realizes he can discern some words now and then is when desperation really gets hold of him. He tries to unstrap himself from his bed, a syringe puts him to sleep again.

“Coming Home” The victim is coming home. He has no memory of what the alien doctors have done to him, but he understands things are not the same they used to be until but one day before. Something he couldn’t say or explain. Something he can only feel circulating within himself and in the new, enhanced way his senses seem to work. This new vision of things which won't necessarily be a good thing for him and, perhaps especially, for who's waiting for him at home, a reflection which fills him with grief. This is why he can say “I see the world with different eyes, new eyes…or are they old eyes?” for sometimes the most developed civilizations are also the most ancient ones and the concept of old and new merge into one, as the music in this final track does, with its huge slabs of electronics counterpointed by slabs of electric guitar. Will the aliens succeed in their attempt at saving themselves from extinction by engrafting us?