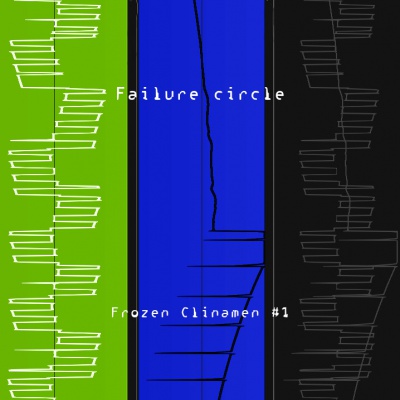 https://eg0cide.com/2018/07/22/eg0_184-failure-circle-frozen-clinamen-1/
Frozen Clinamen is a new serie of works started by Failure Circle (a solo project of Kecap Tuyul) in autumn 2017. It follows a simple method inspired by the the possibilities of his no-input mixer set-up and the will to use a limited sound material in a posteriori compositions. Frozen Clinamen #1 was recorded and mixed between november 2017 & june 2018.

Methodology
step (1) Tweaking the set-up until it produces some seemingly autonomously self-sustained sound sequences.
step (2) Stopping tweaking and recording for at least 20 minutes without any intervention on the set-up.
step (3) Repeating steps (1) & (2) several times.
step (4) Using the generated sounds as only source in a posteriori compositions. The only variations used while mixing are equalization, panoramics and volume levels.
step (5) play it at low/high volume with open/closed window while complety asleep / fully conscious.